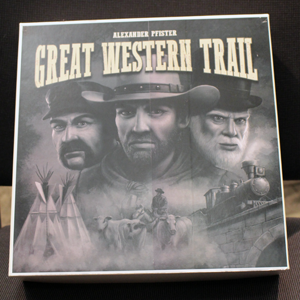 On this years "Herner Spielewahnsinn" we had the opportunity to play the new game of Alexander Pfister. Because we were very impressed of Mombasa, we were excited if the author will convince us again.

As you can guess from the name of the game, we play a cattleman who herds his cattle on a trail to Kansas City because there you can earn money and victory points with them. Since it's so rewarding you do it a few times per game.

The rules explanation was not that short with 30 minutes, but we went through all bulding tiles and things that can happen eventually. I think you don't have to explain all buldings because the symbolism is very clear and easy.

Of course I can't say that much about the material because it was only a prototype. But the graphics so far were very good and if they solve some similarities in the coulours, it will be a very good product. (Please be aware that all pictures in this article are pictures of the prototype, the final graphics surely will differ from that.)

Now, to the game itself. We move our cattleman to Kansas City and stop at different places which allow us to make some actions. Because this would be too easy, there is also some kind of deck building. My cattle is represented through cards and at many places I have to discard a specific cattle or a combination of them. So I can make up a strategy but I always have to adjust it because of the cards in my hand to make the best out of my turn. 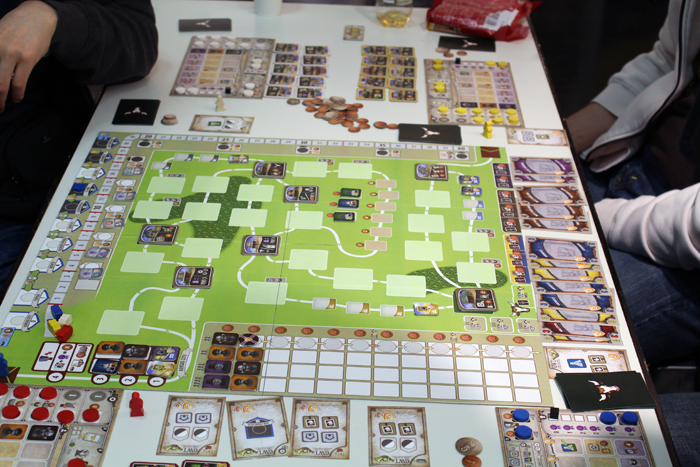 One turn consists of 4 phases:

A) Play contract cards: When I get contract cards I have to put them on my discard pile. Later, when I draw this contract card, in this phase I can play it. Every contract card shows a bonus which will be multiplied with the sum of all of my played contract cards. So it makes sense to play contract cards but if I couldn't fill them til the end of the game they will reduce my victory points. I can also score contract cards in my deck I haven't played, but they slow down my deck, that's a very smart mechanism.

B) Movement: I can move my cattleman up to 4 spaces and if I pass over a specific building or area I have to pay money to another player or the bank.

C) Building action: If I stop my movement on a neutral or my own building, I may take the actions. Following some action examples:
Hire persons (cowboys, builders, engineers)
Change cattle into money (the cards just go onto your discard pile, not out of the game)
Buy new cattle (cost, number and strength depending on number of my cowboys)
Build new building (depending on the number of my builders). The new building will be placed on a free space on the trail to Kansas City.
Develop your own railway (depending on the number of my engineers). With this action you can build stations which will give me victory points and allow me to move discs from my player board to unlock a bonus. 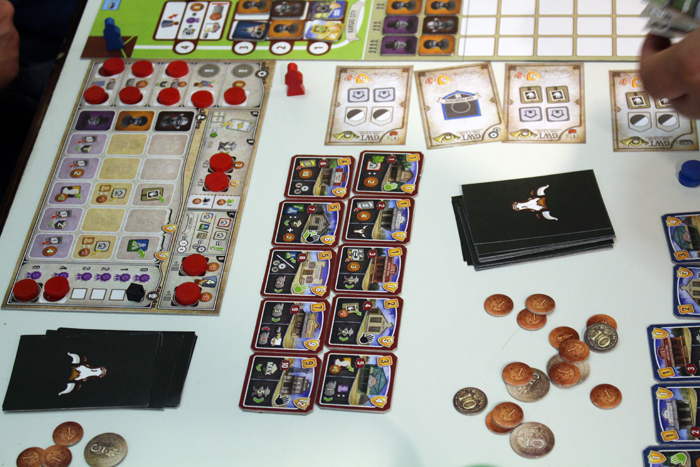 What happens when I'm arriving in Kansas City? I always have to stop there and have to do four mandatory steps.I count the strength of all different cattle in my hand and sell them for this value to a city. First of all I get dollars for this but I can also remove a disc from my player board. Where I put this disc depends on the value of my sold herd. At the end of the game it is important that I sold my cattle to adjacent cities (very small valued cities will give me negative victory points instead). Now I have to decide which new persons to put into play. This new persons will trigger the game end at some point. At the end I will discard all my hand cards and put my cattleman again on the start of the trail. Why do I put disc from my player board to the game board? This action will unlock actions in some buildings, increase my hand size limit or my movement.

At the end of the game I will get victory points for different things: stations, cattle in my deck, contract cards, served cities etc.

I could have written a lot more, but this only should be an overview. If you have some question just leave a comment and I try to answer them. Great Western Trail was our highlight in Herne this year. We played six prototypes and many other already published games, but none of them has convinced us like this one. Everything in this game makes sense. At no time you have the feeling that a mechanism is just there because someone wanted as many mechanism in a game as possible. (That's the same feeling I already had with Mombasa.) The explanation of the rules won't be that easy but the gameplay itself is very simple but not trivial and really demanding. The rules are very clear, the player boards are really nice designed, so that you always know what you have to do. Especially the deckbuilding is a mechanism I appreciate very much, because it requires a lot of tactic and not only strategy. If I understood correctly, the game will be released to Essen this year and it will be definitely on my "must-buy-list".

If you have any questions join us at Facebook. We will give you an answer.