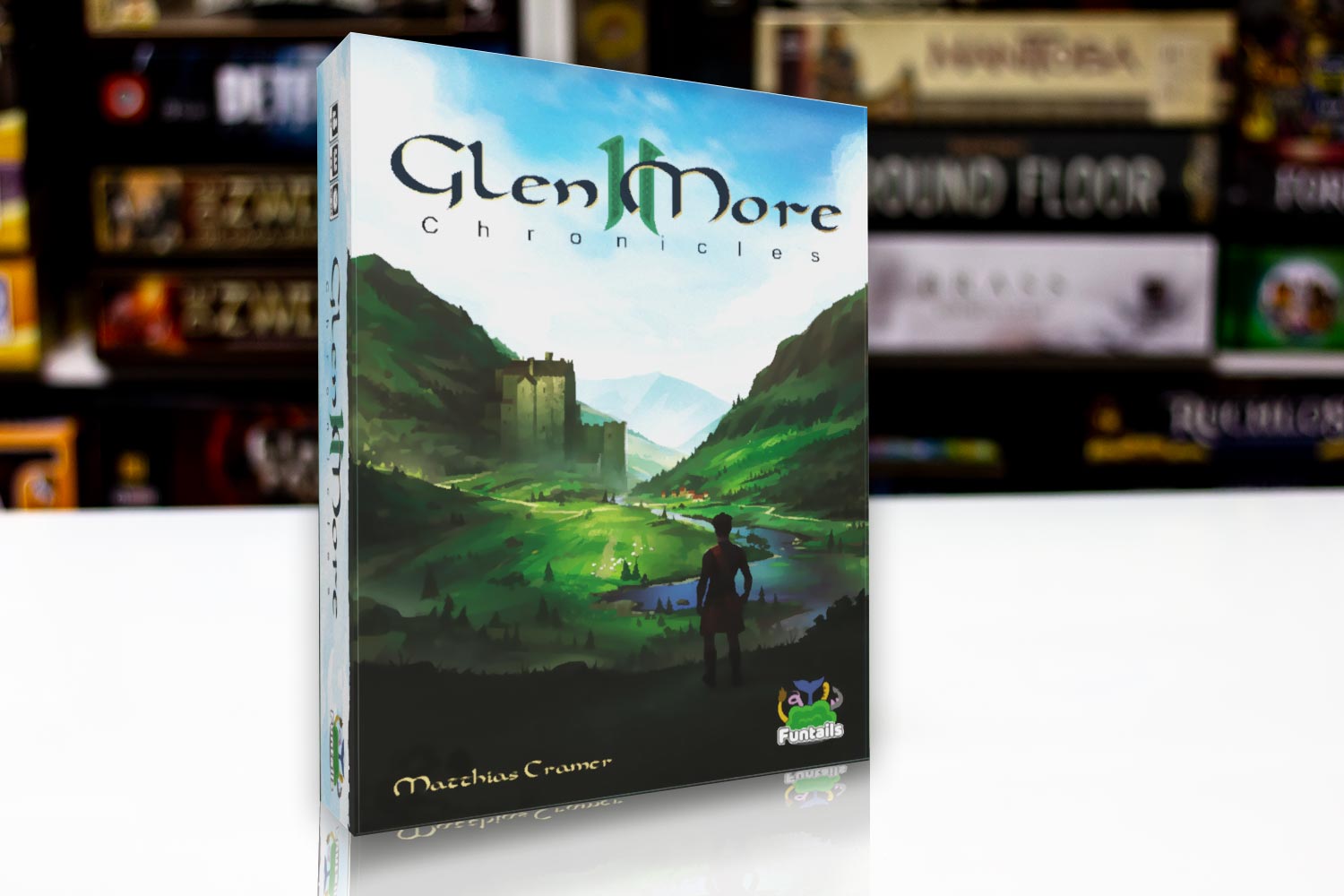 In March 2016 we played the successor of the popular Glen More game at the Ratinger Spieletage for the first time. Almost three years later we were able to play the almost final version of "Glen More II", which will soon start on Kickstarter. Read here why the game will be worth a look.

This is Glen More II: Chronicles

"Glen More" was released by Alea in 2010. The game found many friends and was an incredible sales success. Now, the newly founded publishing house Funtails is striving to publish the second, greatly revised, part. The financing should be realized via Kickstarter. Creative Director Andreas Geiermann told us that they wanted to keep the best third of the game, a third should be improved, and the final third should be completely recreated. 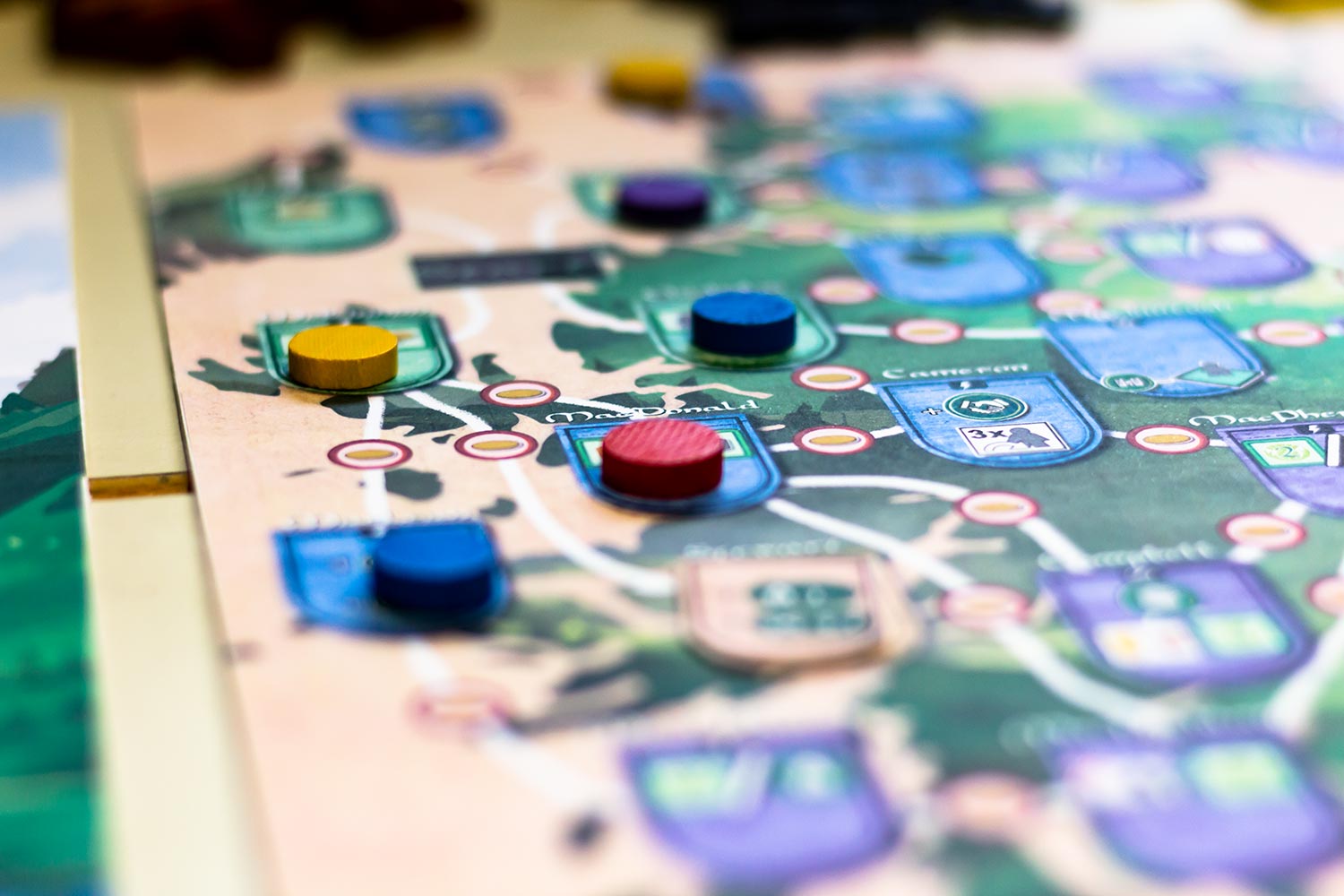 We tested the game with a game convention in Mönchengladbach. There, we played one of the eight Chronicles that will be included in the game. Michael and Daniel from Brettspiel-News.de and two friends played the game and tried it out in peace. A prototype was played, which was optically still far from final. However, the rules were already in place and everything went smoothly.

"Glen More" is a roundel game in which tiles are laid out in a kind of circle and the players decide how far they want to go to take a tile each turn. It's your turn again once the other players have passed by.

Anyone who places themselves on a tile must be able to pay for it. The tile is built into your own realm and all adjacent tiles are activated once. In this realm, there are buildings that produce raw materials (grain, wood, cows, sheep and stone). Further, you might find processing buildings such as slaughterhouses (generating victory points) or distilleries that produce Scottish whisky and many more. 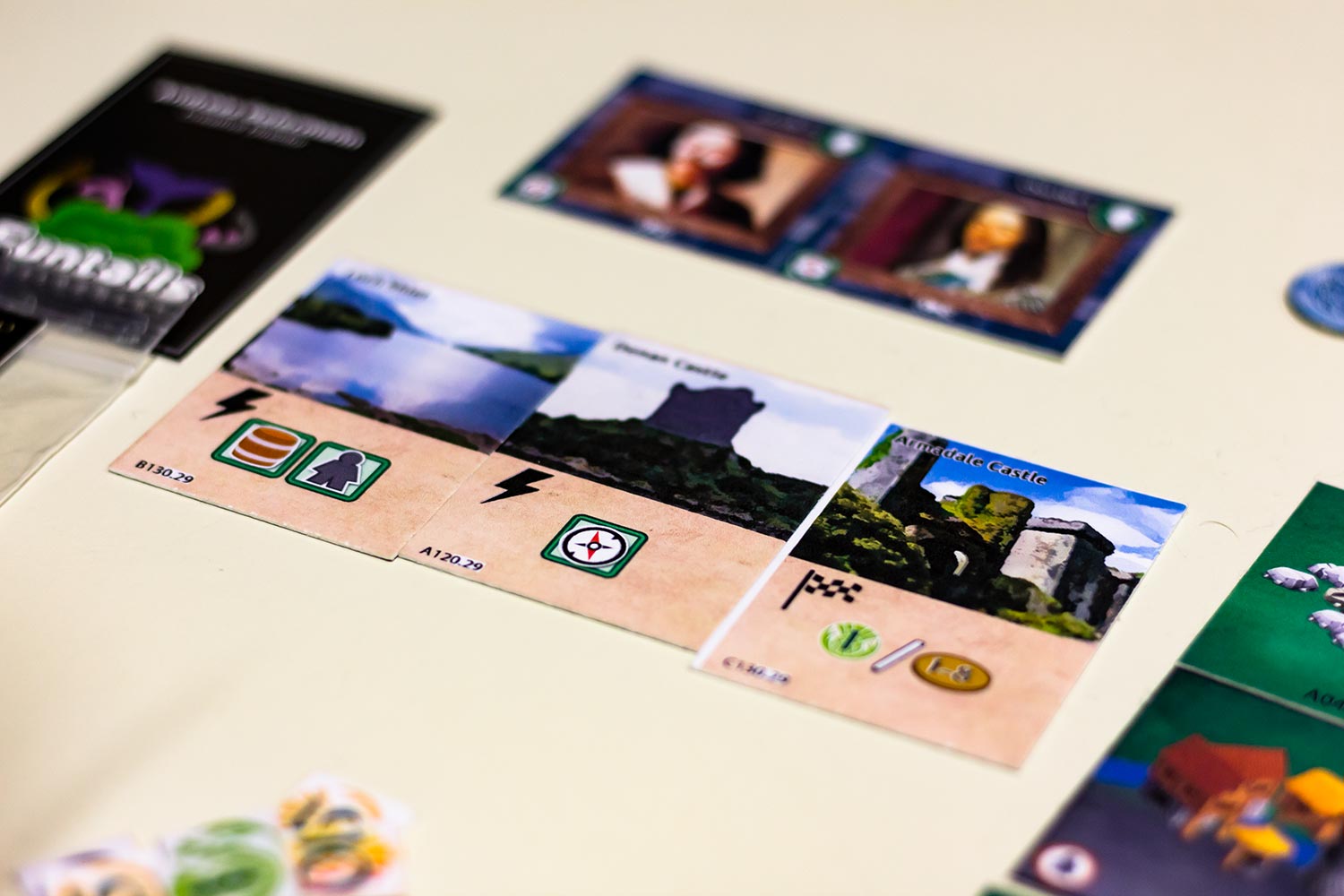 In addition, unique historical buildings can be erected, which bring advantages to the owner and are relevant for the distribution of victory points - the tile must also be built into the own clan area.

Clan members are recruited and "Chieftains" appointed. "Chieftains" are the second way to earn points in the intermediate scoring.

The third type are the whisky barrels, which are must serve this purpose.

In the old Glen More there were three stacks, which were played on the rondel bit by bit empty. Once a stack was exhausted, an interim evaluation was triggered. The players received victory points equal to the difference between the player with the least points and their own number. If one player has 5 barrels of whisky and another has 0, then the difference is 5. A table is then used to see how many points this earns. As previously described, whisky barrels, "Chieftains" and places are compared numerically, then the game continues. 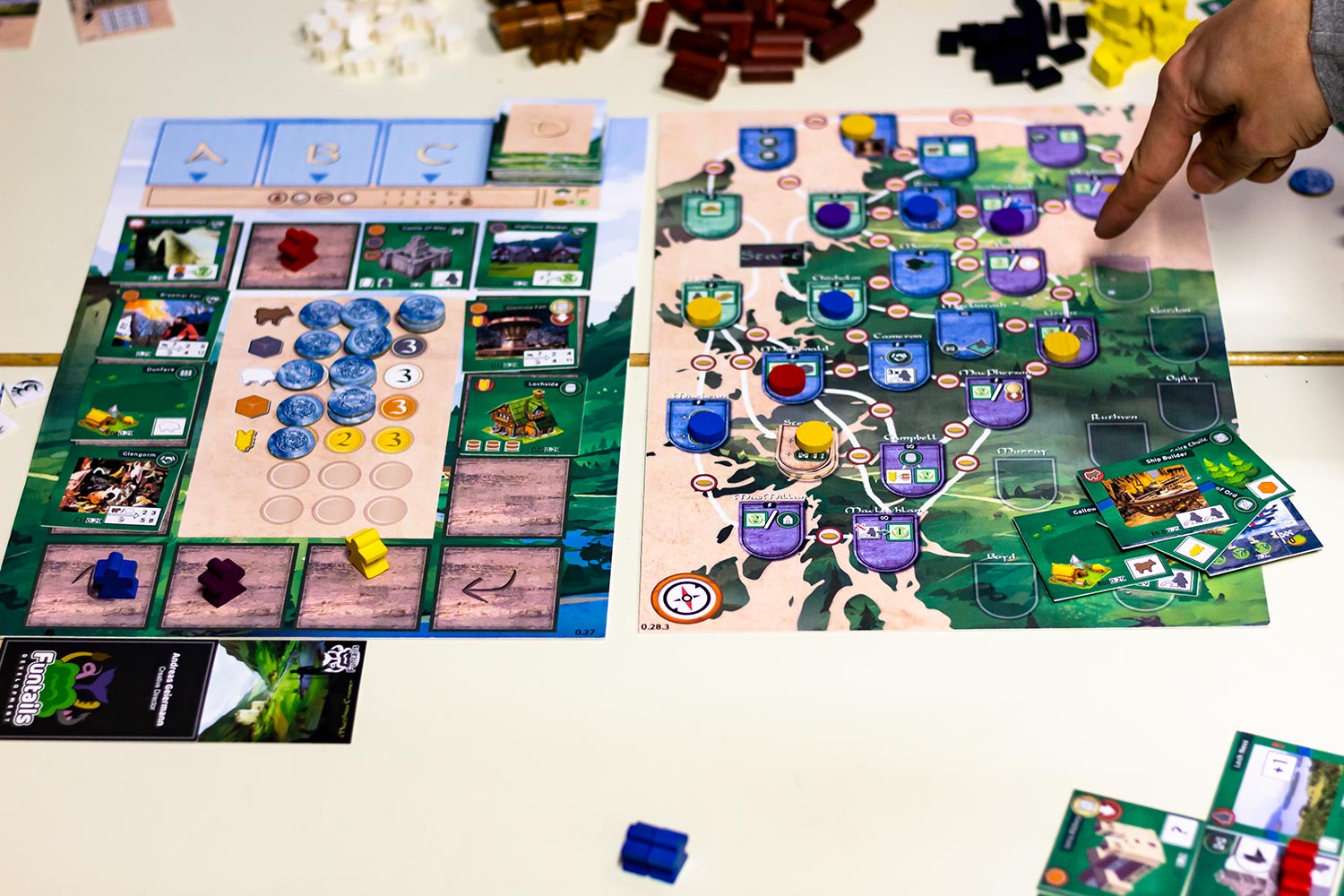 As soon as the third evaluation is completed, the game ends and the final settlement takes place. The number of plates is important for the final score.

This is new in Glen More II

Much has changed. In addition to the basic functions describe above, characters now move into the game. These offer functions on an external game board. There, more and more will be progressively unlocked. Each bonus is only possible once, though. This encourages and gives you more possibilities than just laying your tiles in a fitting way.

In addition, the Chronicle was fun to play and was a useful part of the game. On the one hand, the feeling of having Glen More on the table remains, on the other hand, plenty of changes have happened. The many years of development are obviously paying off here. We were at the table with two players who knew the first Glen More and two who hadn't played it yet. Everyone enjoyed it. Visually it was still expandable, which is expected with a prototype. The first pictures of the final material, however, were more than promising. The publisher really wants to raise the bar here!

If you enjoyed "Glen More" - and there should be some of you - you should definitely keep an eye out for the new version. The ideas for the other Chronicles sounded very good and so the game seems to offer a lot of variety. Based on the experience that the first Chronicle fits very well into the game and the great effort the author has put in for years, it will become a good or very good game in the end.

I particularly liked the plan, which is placed adjacent to the game board and on which additional bonuses can be gained. This alone offers a good alternative to the many modular expansions to collect points, or to underpin your own style of play more strongly. There is also a lot of potential to try out which of the bonuses make the most sense in which situation.

In addition, I still believe the "big equalizer” to be a neat solution. By deducting points at the end of the game for oversized estates, the incessant collection of tiles becomes the worst option. It is worthwhile to think about which tile is really needed and it must always be compared with the other players in order not to accumulate excessive amounts.

Through the new and old aspects of the game, the author has brought some more interaction and points of contact with the other players into the game, which clearly improves the experience.

Since I had heard of "Glen More" but had not yet played it myself, I approached the prototype game with few preconceptions. In the first 1-2 rounds, I had to learn the mechanics. How, for example, what is activated when, what to watch out for when placing the tiles or which abilities, which Scottish nobleman I should place my markers on, on the reward board. After that, I was quickly in the game and was able to familiarize myself with possible strategies that would hopefully bring me plenty of victory points.

Due to the position of the plates and the presumed strategies of my fellow players, I decided to focus on my whiskey production. Drinking is always popular, I had already secured a grain field in my initial phase without a plan, and a distillery was in walking distance. Later, I chose the butcher's shop as my second mainstay, as I - as Andreas of Funtails lovingly called it - had accumulated a few McMoos and McBaahs and wanted to convert them into victory points. That doesn't sound very animal-loving at first, but since the slaughter goods were wooden meeples, there was luckily enough distance to reality. I then put a some energy into the boat race, which started during the game as a chronicle and led us across all Scottish empires. After about 2 hours playing time, which passed in the blink of an eye, I was satisfied with my performance in the Scottish Highlands.

"Glen More II" was quite clearly a prototype with significant development time on the Highlands, especially the balancing seemed to me to be quite well done. At no moment was there the feeling that an ability was too powerful or that a strategy would lead to a dead end. The idea with the Chronicles is good and a high replay value results from the possibility of choosing among 8 different variants in future. The group of four in which we played seemed perfect to me in terms of the number of players. With less competition for the tokens, some of it might be lost; as a 2-player game, I imagine the competition for victory points to be a bit dull, but I’m happy to be proven wrong.

As far as playing the prototype of "Glen More II" is concerned, I can say for myself that it provided me with the best entertainment in the competition with 3 other Lairds. The game offered choices, it rewarded short-term strategies and never left me with the feeling of being hopelessly inferior just because I had bet on the wrong sheep in my initial confusion. The first pictures I saw of the final artwork of the game convinced me even more. If you are looking for strategic games for a quartet of players, you should take a serious look at "Glen More II Chronicles".